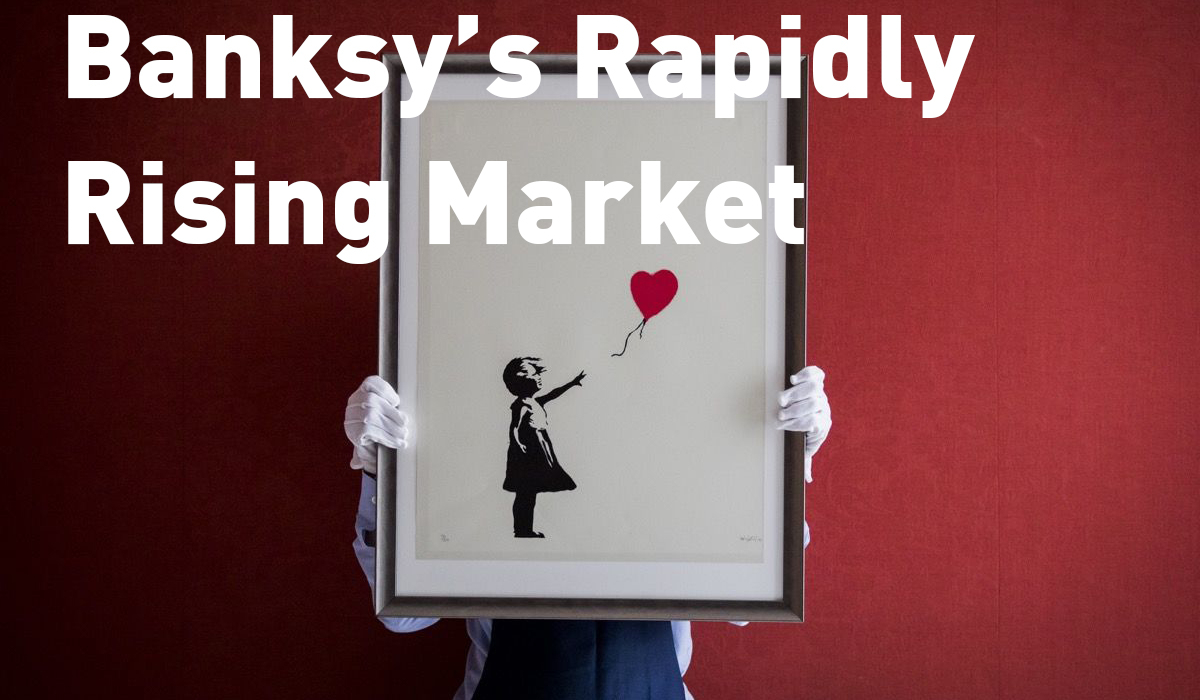 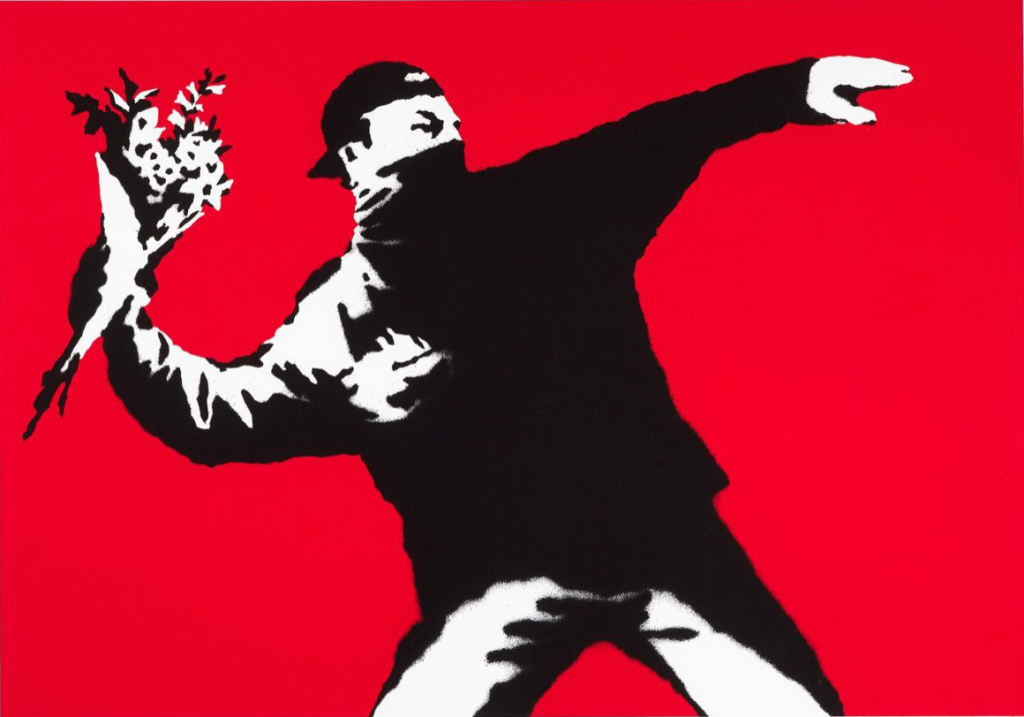 Banksy has closely guarded his identity for decades, and he’s also long played a uniquely active role in shaping the way his work is presented and sold. From the infamous shredded work at Sotheby’s in 2018, to his publicly denouncing and suing organizers of unauthorized exhibitions, and a recent trademark dispute with a greeting card company, Banksy’s public image as an irreverent, globetrotting trickster is sometimes at odds with his very concerted efforts to control the market for his work.

Those efforts often fall to Pest Control, the firm that authenticates Banksy’s works and sells them on the primary market. There is a vast economy of objects attributed or related to the artist circulating at all times, from exhibition posters to merchandise associated with specific projects like his hotel in Bethlehem. And, spurred by the rising prices, there is also a growing number of fakes.

But as far as major auction houses are concerned, the prints and unique works with certificates from Pest Control are the only truly authentic Banksy works—and the market for them shows no signs of slowing. 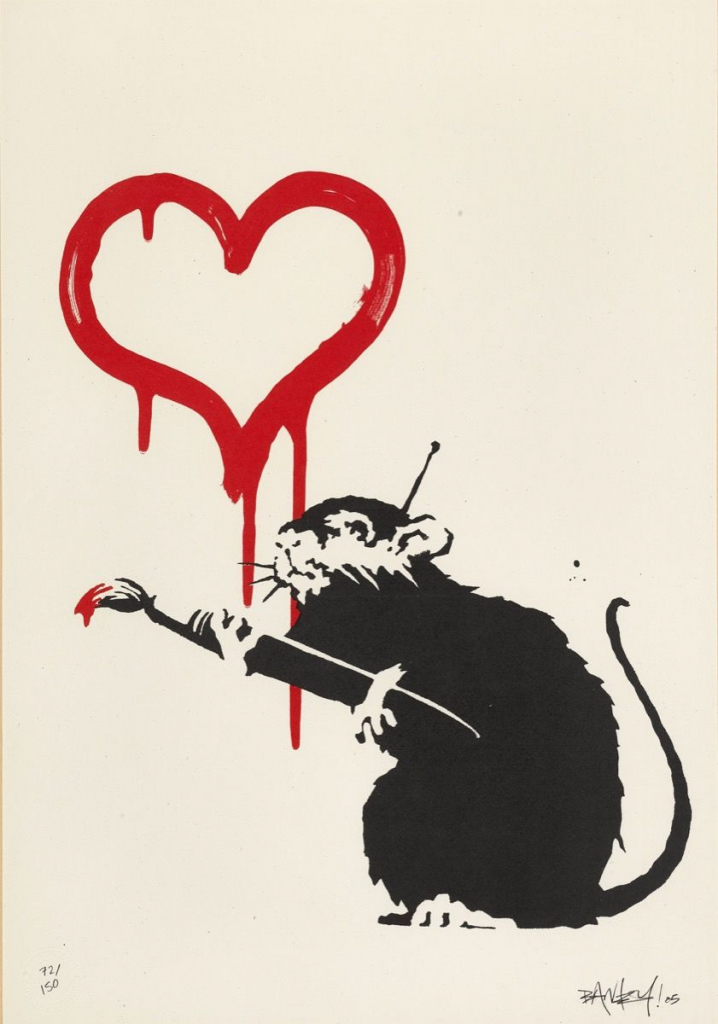 Recently, Sotheby’s closed its third dedicated sale of Banksy prints. It achieved a price at least double its high estimate—several sold for prices four, five, or even 10 times their high estimates. The sale’s total take of £2 million ($2.7 million) more than tripled its presale high estimate, and more than half of the buyers were buying from Sotheby’s for the first time. The auction’s top lot, a version of the iconic Girl with Balloon (2004), elicited 24 bids that pushed it to more than five times its low estimate of £80,000 ($103,000). It ultimately sold for £438,500 ($567,000).

“When the consignor purchased it in 2004 from Pest Control, she told me she paid £275 [around $500],” said Yessica Marks, a deputy director and senior prints specialist at Sotheby’s in London. The collector got in touch with Sotheby’s after reading about the 2018 shredding of another version of Girl with Balloon. “She called us to get an insurance valuation, and she was so shocked to learn that it was worth £80,000 to £120,000, she decided to consign it.” The decision paid off handsomely: In 16 years, the print’s value had increased to nearly 1,600 times its original purchase price. 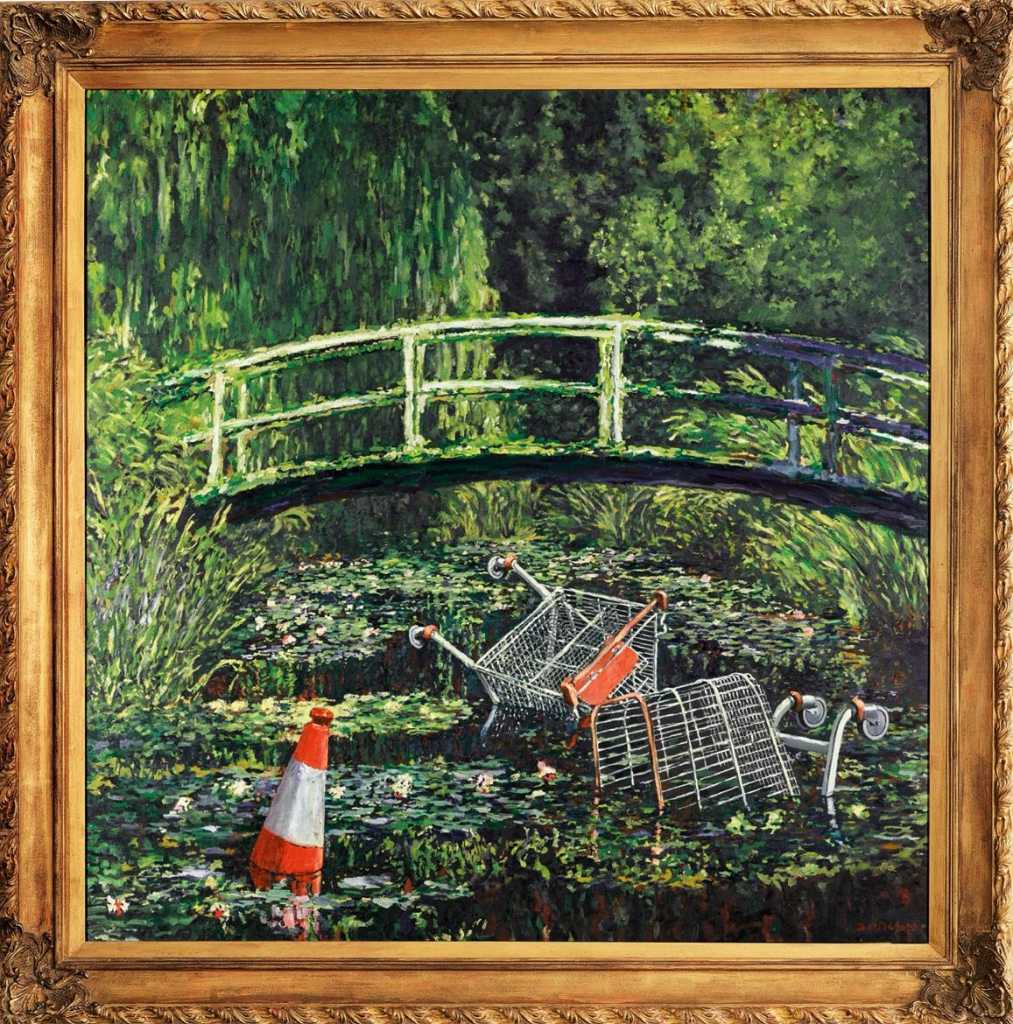 The Girl with Balloon print that sold had most of the hallmarks of a desirable Banksy work, especially a Banksy print. Most notably, it features one of his most beloved images, which emerged as the United Kingdom’s favorite artwork in a 2017 poll.

A lot of Banksy prints you find are in good condition because they’re fairly recent, but Girl with Balloon was only worth £275 when it was issued in 2004, so it wasn’t considered fine art as it is now, so you do sometimes see prints that haven’t been looked after as well as they should have been.

Typically, Banksy creates two editions based on each of his images. One is made in an edition of 150, with each one signed by the artist. These tend to be the more expensive editions. He also usually concurrently creates a larger edition of around 600 unsigned works. And lately, a third group of his prints have become especially popular and becoming more and more sought after. Banksy made 88 artist’s proofs wherein each impression the balloon has a different color—there’s gold and purple and pink. A purple balloon was the top lot in an online-only auction of Banksy prints

From unique colors to unique works

Collectors operating in the upper echelons of the Banksy market are after the unique paintings and sculptures, which are rarer still than the artist’s proofs. Last year at Sotheby’s, his enormous painting Devolved Parliament (2009) smashed its high estimate of £2 million ($2.4 million) to sell for £9.8 million ($12.1 million), which remains Banksy’s auction record.

This year, the auction house achieved his second-highest result when it sold the 2017 triptych Mediterranean sea view (2017) for £2.2 million ($2.8 million) in its virtual “Rembrandt to Richter” auction. Sotheby’s is now angling to top this summer’s result when it offers Show me the Monet (2005), on October 21st, with an estimate of £3 million to £5 million ($3.8 million–$6.3 million). With the increasingly global appeal of Banksy’s market, the virtual nature of that auction could mean Sotheby’s will be seeing even more money for Banksy’s Monet.

His appeal has spread across the globe, it’s not just in Britain and Europe, noting a prevalence of buyers from the Middle East and Japan, which ultimately drew bidders from four continents.