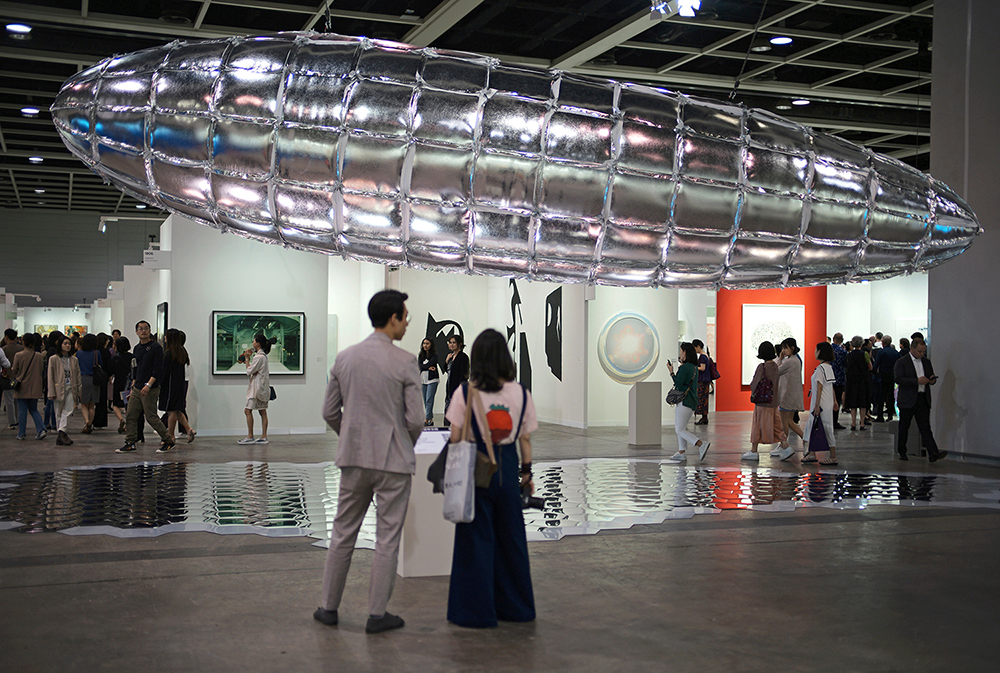 After a tumultuous period in Hong Kong marked by continuing protests and fears of a coronavirus outbreak, Art Basel has called off its fair in the city. The fair had been due to run from March 19 to 21. In a release about the fair’s cancelation, MCH Group, the holding company that owns Art Basel, said that the coronavirus and “severe logistical challenges” limiting travel were among the “numerous factors” that had influenced the decision. The ongoing protests were not mentioned in the release.

“Our thoughts are with those affected by the recent coronavirus outbreak all around the world,” Marc Spiegler, the global director of Art Basel, said in a statement.

“We are acutely aware of the important role that the fair plays within the region’s cultural scene and for our galleries, both in Asia and around the globe. Our team dedicated extensive time and effort to ensure our show in March would be a success over the course of the past year. Unfortunately, the sudden outbreak and rapid spread of the novel coronavirus radically changed the situation.”

Adeline Ooi, Art Basel’s Asia director, promised that the fair would return in 2021. Next year’s edition is currently slated to run from March 25 to 27.

Shortly after Art Basel called off its Hong Kong fair, Art Central, another event of the sort in the city, followed suit. “The uncertainty has made it increasingly untenable to guarantee the safety and well-being of the public,” Art Central said in a statement. “Acting on its obligation to deliver a successful event which is ever dependent on a strong audience, the fair’s organizers today concede to the simultaneous myriad challenges.”

Christie’s, meanwhile, announced that it would postpone its sales planned for March to May. Its Asian Art Week sales, originally set to take place next month in New York, will be moved to June. “We believe these are the right decisions to take now to ensure the best sale environment on behalf of our consignors and our clients,” the auction house said in a statement.

The Art Basel cancelation comes after the fair tried to console exhibitors worried about showing in Hong Kong while protests raged on. The fair had previously said in December that it would offer discounts on shipping and lodging because “we deeply value our relationship with our gallerists.” A representative for the fair said exhibitors would get a 75 percent refund on their booths.

The discounts offered originally by the fair in January proved to not be enough for some of the fair’s 240-plus exhibitors. Luxembourg & Dayan, SCAI the Bathhouse, and Tyler Rollins Fine Art dropped out of Art Basel Hong Kong in January, and days later, 24 enterprises with plans to exhibit there called on the fair to do more to alleviate its exhibitors’ concerns about a volatile market in the city. Dealer Richard Nagy followed with his own letter to Art Basel in which he said that the fair was “now commercially on artificial life support.”

Getting there was also proving increasingly difficult for exhibitors, due to travel restrictions put in place amid the spread of the coronavirus. Cathay Pacific and British Airways were among the airlines that had canceled flights over the course of the coming month, and U.S. officials urged people to avoid traveling to China for non-essential reasons.

An unlikely combination of factors has led art spaces to close for varying periods of time over the past month. In November, with protests taking place in Hong Kong’s streets, Hauser & Wirth postponed a planned opening of an Annie Leibovitz show; the exhibition still has yet to go on view in Hong Kong. And in January, public art institutions shuttered in the city as officials worked to contain the coronavirus, which has sickened more than 4,600 in China alone. At the time, Art Basel said it was “closely monitoring” the situation.

Last week, two Beijing institutions also postponed major events that were set to occur there. The CAFA Art Museum postponed the opening of its CAFAM Techne Triennial, which had been slated to open in October, and the X Museum, a new private museum founded by collector Michael Xufu Huang and businesswoman Theresa Tse, called off its inauguration. This week, the He Art Museum followed suit and delayed its opening, scheduled for March 21, for an as of yet unannounced date. Beijing Art Weekend postponed its 2020 edition to April, leaving open the potential for cancelation if conditions did not improve by mid-April. And on Thursday, February 6, with the death toll exceeding 500 from the coronavirus in China, the UCCA Center for Contemporary Art said three exhibitions slated to open in February and March would not open on their expected dates.

Some have cast doubt on whether the protests had impacted the art market in Hong Kong. Dealer David Zwirner, whose mega-gallery operates a space in Hong Kong, told ARTnews in December that the market in the city remains “alive and well.” He wound up canceling a Luc Tuymans show that had been slated to happen at his Hong Kong gallery this year.
This is not the first time Art Basel has canceled a fair. In 2001, following 9/11 and an anthrax scare, Art Basel postponed the inaugural edition of its Miami Beach art fair. The deposits paid by exhibitors that year were put toward the following edition.